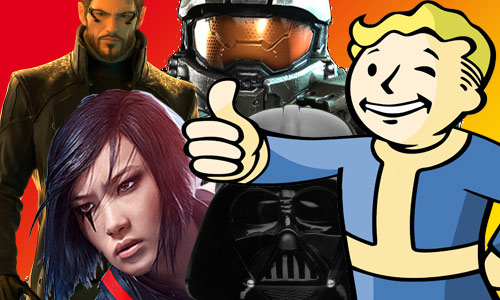 Now that E3 over its time to let everything sinks in. I could probably assume that we can all agree that Bethesda Won E3 2015 with their first ever press conference on Monday June 14, 2015. But here’s a quick recap, 10 of the biggest announcements among all of the other things from E3 2015 you should know about if missed it.

1.)Microsoft Xbox One backward compatibility. Among the many exclusive games Microsoft was showcased at their press conference. None comes to the big surprise as the announcement of free backward compatibility update allowing you to play Xbox 360 game discs and digital games on Xbox One. Making Xbox One useful, once impossible now possible with limited titles at the moment. The update is set to be released on Holiday 2015. But for now check the following[Xbox One compatibility] for more details.

2.) Microsoft HoloLens. Probably one of the biggest innovations in VR and AR (augmented reality) in history. A Working HoloLens demo showed playing Minecraft and many jaws dropped, left simply speechless when mine craft game pops out on the stage and you can interact with it. Microsoft has out done them self once again.

3.)Fallout 4. This year E3 was certainly Fallout porn with over an hour of gameplay footages throughout the press conferences, and one good announcement after another. Starting with the release date of November 10, 2015, and a collector’s edition that includes a replica pip-boy that will work with your phone and a fallout 4 companion app to accompany it, which is usable on mobile phones without the pip-boy. To ease the waiting for fallout 4, fallout out shelter currently an IOS timed exclusive mobile game. The androids Fallout shelter will be released in a few months.You happy to know that fallout 4 PC mods will work on Xbox One too, after a couple months after initial release of a creation kit. The last bit of confirmed fallout 4 news was your beloved dog companion cannot die in the game, so no more needing to reload that last that save in fallout 4.

4.)Star Wars Battlefront. This year’s second biggest game this year releases November 17, 2015. A week after Fallout 4 release, good timing EA well played, I guess you want to us to kiss our social life goodbye for the rest of year ha-ha. But overall show casing gameplay footage of Star Wars Battlefront running on a Play station 4 was already looking that amazing. I can’t wait to see some PC footage running on Nivida surround or eyeinfinity setups.

5.) Mirrors Edge: Catalyst will be something worth looking forward to for next year February 23, 2016. Finally getting some game play footage of the new envisioned of our beloved heroine Faith. Mirrors Edge: Catalyst is confirmed as a reboot to the series and taking the opportunity to dive deeper look at the character Faith and yes, it’s confirmed usable guns will not be in this game focusing on flow and martial art combat.

6.) Call of Duty: Black Ops 3 at E3 no surprise there, showing co-op and multiplayer game play, titan fall style Multiplayer without mechs confirmed. But the biggest news PlayStation will be the new home of Call of Duty and will be getting all the DLCs first. It’s an Interesting turn of event of course. Call of Duty Black Ops 3 releases on November 16

7.) Mass Effect Andromeda. We got a sneak peek teaser trailer and release date of Holiday 2016. Taking place in a whole new galaxy showing a desert atmosphere and a drivable manko which I could probably assume is drivable, unnamed protagonist in N7 armor confirmed Yess!

8.) Final fantasy 7 remake. The most long overdue remakes makes it first official debut announcement that it’s finally getting a remaster version coming to the PlayStation 4 first. No official release date as of yet, But brining on the nostalgia and excitement.

9.)The Last guardian made a surprising appearance on e3 this year being in development since 2007. We got a glimpse of what’s to come of The Last guardian next year, a PlayStation 4 exclusive which still looks relatively the same as it did in 2009 if anyone recalls. 10.)Shenmue 3 Lastly but not least jumping on the bandwagon is the Shenmue 3 sequel kick starter project which have already raise over $2 million for the project which Sony is going help getting it developed. It's official reveal surprised everyone. Well that's E32015 in a nutshell, I hope everyone enjoyed it as much as I did this year. Now let the waiting game begin.
Tags:E32015, EA, Microsoft, Sony, tech reveal, Xbox