Marvel’s Guardians of the Galaxy Review

While Marvel’s Guardian of the Galaxy was an unnoticed game, when it initially released back in Fall 2021. Among the heat of seasonal major releases. But having gained some significant traction, when it joined the Xbox Game Pass lineup in March 2022. Making it a good contender to the question, is it even worth playing/purchasing? 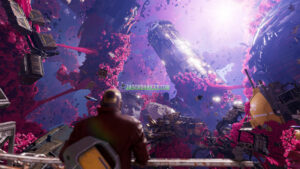 Well having obtained my copy of Marvel’s Guardians of the Galaxy, through a promo bonus from purchasing a computer. This is certainly the most expensive game I’ve reviewed lol. Nah it’s all good. Currently the PC and last gen version are retailing around for a sale price of $40.00CAD, makes it a more reasonable purchasing price, oppose to the full $79.99 CAD price tag or $93.99CAD(PS5).

Considering how short the game is, 16 to 18 hours for the campaign, and around 30ish hours to 100% completion. Therefore, if you can get it on sale, it’s a good weekend game to blow through. But if you got an Game Pass subscription either for PC or Xbox, it ultimately solve the most conflicting issue being: “Heard that Marvel’s Guardian of the Galaxy is a good game to playthrough, but I don’t want to buy it.” situation. 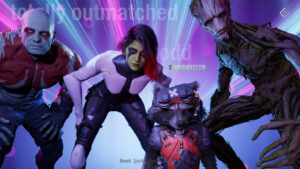 As the main selling point of the game is the story, and the Guardians of the Galaxy cast. Where unfortunately you only control/play as Peter Quill(Star-Lord) in a Third Person shooter with no cover system, while giving commands to the other Guardians, making it some of the most convoluted Boss fights controls as well, more on that later. Whereas the story isn’t without it’s own flaws.

The biggest flaw of the story is the extremely slow pacing, that can make some portion feel sluggish. As it tries to set the back story, while also overloading the player with a lot of Guardians of the Galaxy lore. Being narrative and lore heavy might be great for those who seek it. I found it a bit overkill trying to the digest more than 1 hour of story content per session. But it’s the quirks and funny dialogue choices that make the story enjoyable. Although your dialogue choices have very minor effects on the overall story. But being able to skip portions of a chapter, through successful dialogue is rewarding. So to simply put it, without any spoilers. Marvel’s Guardians of the Galaxy campaign is essentially a really long Guardians of the Galaxy movie, overloaded with a lot of good quality narrative/lore for each characters. As they develop progressing through this relatively short but dense the campaign. 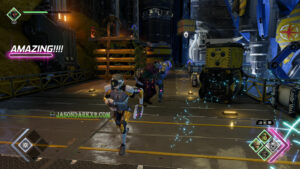 While it’s evident that most of the budget went into crafting a good quality story, stunning visuals, and great music selection. The gameplay certainly took a hit, as mentioned earlier, you’ll only get to play as Peter Quill(Star-Lord) In a Third Person Shooter, where Star-Lords abilities are shooting guns and a simple kick for melee. Thankfully the other Guardians are cool and flashy to watch. But having to keep track four other character's abilities can be quite tedious on higher difficulty. Just ended up resort to frantically dodge/Shooting with Quill, and spamming whoever’s ability is ready to use. With no indication of who should be doing what during boss fights. This system could be a nuisance, during your first play through.

Since Quills abilities/weapons are tied to the story progression, rendering all the good stuff to be had only in the very last bits of the game. With mission replay you revert back to the state, when you reached that chapter on that playthrough. New Game Plus only carries over outfits, upgrades, and perks making NG+ rather a useless option in my opinions. Thus, hurting the games replayability, unless of course you don’t mind wandering the linear semi-open world areas for missable collectibles as your main replay value.

Overall is Marvel’s Guardian of the Galaxy still worth it? Maybe, if you are in one or two of the following categories: 1. You’re a Guardian’s of the Galaxy fan and your favorite character is Star-Lord. 2. Looking for a single player game with a heavy Narrative experience. If you're in either of those categories, this is the game for you. Otherwise maybe consider renting it or playing it through Game Pass, just for the experience of playing a game story’s that’s written like a long movie, as there’s isn’t much after the credits roll.