Making a pretty bold move on releasing 2 Assassin’s Creed game in one year, putting a huge gap in between the platforms. Bring up the question on everyone's mind "which one should I get on release?" Personally if they’re both on PC would be a win win, simply wait for steam sale lol. PlayStation owners already have one solution they can probably rent it for $4 for 4 hours on PlayStation now. When it comes down, which will you choose? The next-gen co-op Assassin Creed Unity or last gen Assassin Creed Rogue with a possibility for an epic Templar story and Abstergo manager of the year for modern day, What's up with Assassin's creed Modern day eh...

Today, Ubisoft announced that Assassin’s Creed Rogue, an exciting new installment in the franchise currently in development for the Xbox 360 video game and entertainment system from Microsoft and the PlayStation®3 computer entertainment system, will be available worldwide on November 11.

Assassin’s Creed Rogue is being developed by Ubisoft Sofia, in collaboration with Ubisoft’s Singapore, Montreal, Quebec, Chengdu, Milan and Bucharest studios. Set in the middle of the 18th century during the Seven Years War, Assassin’s Creed Rogue gives players new locations across North America to explore, including the frozen North Atlantic, the Appalachian River Valley and New York. In Assassin’s Creed Rogue, players experience the Assassin’s Creed universe through the eyes of a Templar. As Shay Patrick Cormac, players suffer the brotherhood’s betrayal and transform into an Assassin hunter.

The acclaimed naval components from previous Assassin’s Creed games have been enhanced in Assassin’s Creed Rogue. The game also gives players new weapons to use on both land and sea in pursuit of taking down the Assassins, including a new ship called the Morrigan.

“We know that there are many Assassin’s Creed fans with Xbox 360 and PlayStation 3 consoles who want to get their hands on a new Assassin’s Creed game this year,” says Martin Capel, game director, Ubisoft Sofia. “Assassin’s Creed Rogue completes the North American saga started with Assassin’s Creed III and Assassin’s Creed IV Black Flag and gives previous generation console owners an exclusive opportunity to experience fan-requested features, such as playing as a Templar.” 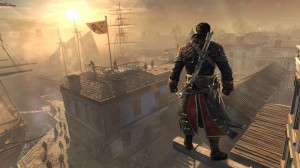 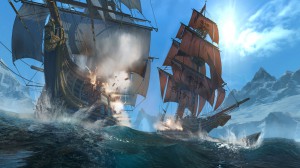 it would have been nice if we got a modern day assassin creed game, yeah AC3 remember Desmond Miles. Ah well both games looks really tempting to get both, curious to see what will happen. Just to put it out there anyone need a AC unity co-op buddy on PC you know where to hit me up.