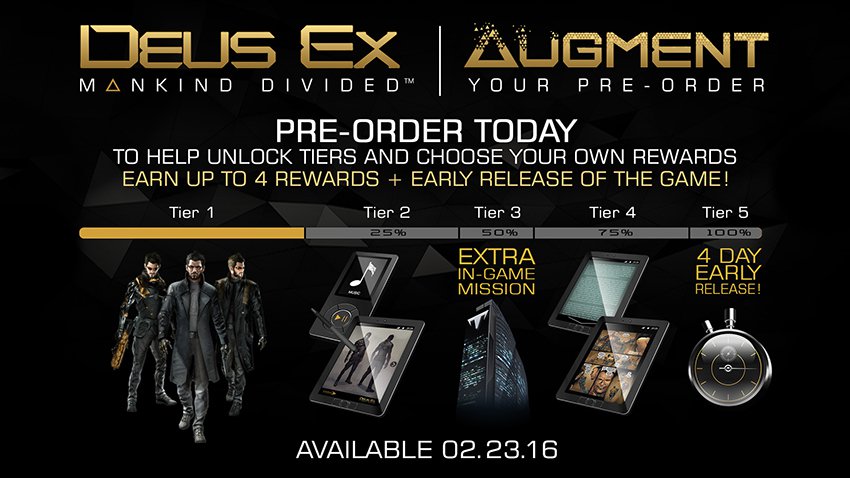 Good News people! Square Enix Deus Ex: Mankind divided ridiculous pre-order fiasco “Augment your pre-order” event has been canned after the many backlashes they received when it was first announced. Originally the plan was to have 5 pre-order tiers, allowing people to choose one unlock from each tier with the last tier being a 4 days early release date, which was so outrageous to gamers and fans alike.

While Deus EX: ManKind Divided release dated will still be locked in for February 23, 2016. Those’s who pre-order or have pre-ordered will receive all the contents mentioned in “Augment your Preorder” as a Day one incentive. as stated in a recent blog post.

We’ve spent a lot of time reading through all of your comments, working to understand how we can try to make things right for you. After much thought and reflection, we decided to close down the program and make all of the incentive content available to anyone who pre-orders Deus Ex: Mankind Divided or purchases a Day 1 edition of the game. Additionally, the release date will no longer be changed in accordance with pre-order numbers, and everyone will gain access to the game on February 23rd, 2016.

What the incentive contents will include:

Now that’s a worth wild pre-order offer, Glad that Square Enix sees our way, the customer way. Hopefully this will be a lesson learned in the Gaming industry to never screw over your customers and fans like that. I think I might just pick up my Deus Ex: Mankind Divided on February 23rd, 2016 or at least wait a couple of months. Cause we here in Canada really need to do something about that horrible exchange rate, making us Canadians pay $80+ bucks for games during these hard times lol.