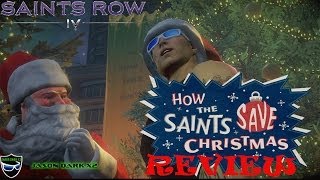 On December 10 for America and December 11 for UK. Our beloved Third Street Saints return for another action packed adventure to save Christmas in the second DLC mission pack for Saints Row 4 titled How the Saints save Christmas. Costing you $6.99 US or free if you bought the $9.99 season pass.

The content of this DLC pack consisting of 3 repayable side story missions that can be played either solo or co-cooperatively, roughly taking about an hour to complete its main story and another hour or two in order to obtain all 10 new achievements for completion.

On your adventure through a Winter version of Steel port and the North pole, you get the opportunity to kill Ginger bread cookies, robo nut crackers,evil elves, and deliver lots of presents . Overall the Story component of the DLC was short, sweet and funny with satisfying happy ending.

There's also the inclusion of 2 new Christmas themed activities that can also be played solo or cooperatively are unlocked in this DLC. One of them is a Christmas variant of heli-assault called naughty and nice it’s where you deliver presents and coals using Santa sleight.

The other one is a Genki mind over murder variant called Genki holiday special, the twist here is the targets are moving. In my opinions it was a nice inclusion of activities, But I would have to say the naughty and nice activity is my favorite, while the Genki holiday special is kind of more of a super hard mode of the Saints Row 4 Genki activity recommend teaming up with a co-op partner for this one.

bundled with a bunch of Christmas themed unlockable, making it feel like an early Christmas:

Simply a Christmas reskin of existing vehicle yet still nice.

All great addition to the arsenal, extract Cheers for the new Dub step gun though.

An excellent addition simply because watching cookies and Santa beating people up is hilarious.

THE VERDICT
Big oOf..
Is it still worth it ?