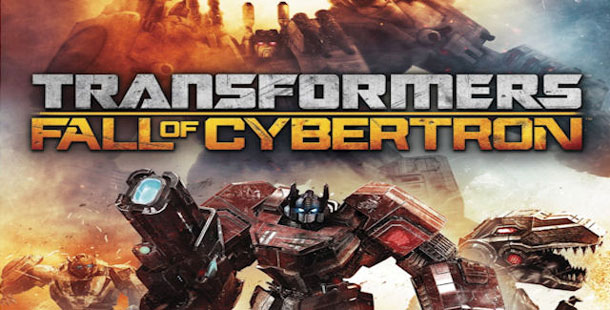 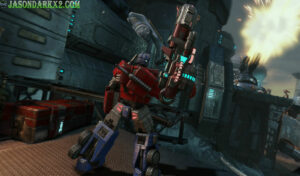 Well, here’s my current situation, having recently picked up Transformers: Fall of Cybertron on sale for -75% on Steam. After 3 years of waiting for it to get down to a reasonable price of $13.75cnd and DLC pack for $2.73cnd is the lowest it’s going to get; wait any longer the game will feel dated eventually. But at least during the sale you can pick up the Massive fury pack DLC as a Starter along with the game cause Massive Fury pack not only comes with cosmetic content for multiplayer like the other DLC packs but single player contents which was originally pre-order content only. Should also noted that sales of PC Transformers: Fall of Cybertron doesn’t come often either. 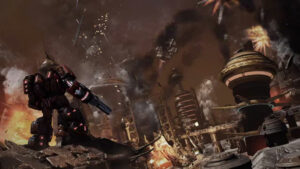 What makes Fall of Cybertron still worth it, is purely in its 13 chapters single player campaign story line, which roughly around 12 to 14 hours to complete this Transformers joy ride where you get to play both as Autobots and Decepticons, where each chapter nicely transition from different characters in an epic power struggle battle on Cybertron which, portray the key events of transformers historic fictional back story. That’s if you cared about transformers fiction for Transformers: fall of Cybertron is one heck game for G1 transformers fans with bits and Timbits here and there attributing to transformers legacy. Otherwise the epic large scale battles and Cybertron scenery will keep you on your heels during the 13 hours. 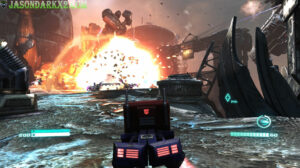 Optimus Prime you got the touch....

Without the co-op Campaign option, replay ability is heavily reliant on audio logs, weapon blue prints, character/weapon upgrades, and achievements bringing it to a good total of 34 hours for 100% completion. Afterwards you are left with a badass, characters for the campaign. The campaign is good for 3 to 4 straight plays through before going stale. Otherwise, just going back to play your favorite parts is fun from time to time.

Graphically and technically Transformers: Fall of Cybertron still looks and plays great for PC even considering it’s been three years since its initial release. Everything feels just right with a spectacular performance of Peter Cullen as Optimus and the rest of the voice cast makes you feel right at home watching an episode of Transformers brought to life with excellent CGI cut scenes accurately depicting the characters.Playing with the controller works perfectly fine on a PC except for some in game menus such as Teletran 1 upgrade store and multiplayer customization would still require the mouse to access options.

If you plan to play with the Keyboard and mouse, you should be aware that this game doesn't allow custom keybindings only preset configurations. While playing on a GTX 970 with Nivida surround enabled everything looks good, but some tweaking to get it work properly because it doesn’t work with the triple monitor setup right out of the box. You can use flawless widescreen fix but should be noted that you lose HUD when you go max 5760 X 1080 resolution. The safe spot is 4800 X 900 which overall still looks good and plays great. 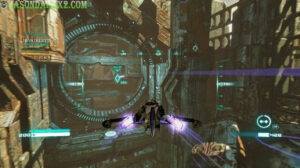 Gameplay wise the third person shooter and transformation still feels fresh and exciting as it did back 3 years ago. It’s something you can’t find in other games theses days that allows you to smoothly transition from robot to vehicle in the mist of combat. When firing each weapon has the nice beefy feel to them, like they really mean serious business. The abilities available through the campaign uniquely define each character trait, nothing like saving the day with an air strike as Optimus Prime, getting around in style with a grappling hook as jazz, or going in rage mode in Dino mode as GrimLock. There’s never a dull moment playing fall of Cybertron. 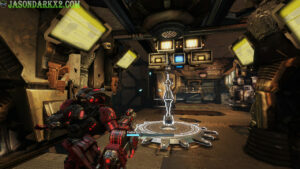 Capturing them Nodes in conquest

While everything transition nicely into the multiplayer portions of the game it’s too bad there’s not that many playing it in 2015.But nevertheless there’s no problem getting into a Team Death match as it’s the only thing people play, just expect to be playing with the same batch of people from time to time with the occasional host migration when the opposing team gets decimated by the seasonal pro transformers players on your team or there’s an obvious cheater vice versa. 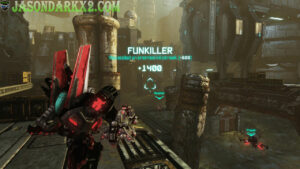 Originally plagued and unplayable due to Hackers/Cheaters way back in 2012 the lack of an actual anti-cheat system ruined the multiplayer experience on the PC version. Now in 2015 the amount of cheaters has died down to a low. You can really appreciate the well thought out and balanced multiplayer that was implemented in this fast pace multiplayer with everyone able to transform zipping around the map. Each of the 4 unique customizable classes: Infiltrator, Destroyer, Titan, and Scientist have access to unique load outs that balances out what each class can and can’t do. Complemented with an excellent armor customization to personalize each custom character which itself would earn a 5 star rating. 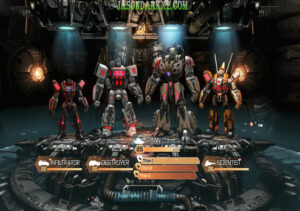 Even when just starting out with the Infiltrators cloak and close range weapons you can still be a form table foe to higher levels or take the support role as the scientist with the healing team mates’ ability and get around quickly with flight through transformation. Likewise, while transformation plays a key role to survivability in multiplayer as did in the campaign since maps are much larger and opened in multiplayer getting to places and/or escaping a fight to look for ammo or Energon cubes for health requires good use of vehicle forms.

Having only played a good solid 18 hours of multiplayer of matches in every available mode without some kind of obvious cheaters swapping abilities and one hit kills. The multiplayer is actually really fun once things start rolling and everyone plays fairly. Overall, it's still a fun multiplayer to play too bad it turned out the way it originally did, but thanks to the small group players still playing this game fairly on PC, Having fun is still a viable option. 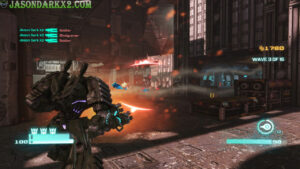 Escalation with Brawl on DownFall

Meanwhile, over the Escalation mode tumbleweeds roll. With only 4 maps mainly designed for CQB two maps for each the faction, Autobots and Decepticons allowing selection from the main cast of playable preset characters. No ability to use your custom created characters from multiplayer is surely amiss here. Playing alone is a no go since escalation is designed for co-op play, even if you survive through the 15 waves the fun wears off really quickly. Since Escalation matchmaking is completely dead for the most part at this point of time, finding people to play Escalation may require some effort.

Overall, Transformers: Fall of Cybertron is a timeless masterpiece of a Transformers game all nicely packaged into one game. From its epic Single player campaign storyline, to its fast paced Multiplayer complimented by its amazing multiplayer character customizing, and Escalation mode for those survival fanatics. There’s really nothing not to love about Transformers: Fall of Cybertron besides, its ridiculous digital price tag when not on sale and the low multiplayer population. But those who still regularly playing it, making this still a worthwhile game to get when on sale. With the available Transformers game on the market I’ll totally recommend this one as a must play for any Transformers fan alike.