Jedi Fallen Order released back in 2019 to capitalize on the release Rise of Skywalker. But does Fallen Order hold up to its merits? Now that the hype and raved has subsided. To simply put it, it is a Star Wars game, but we do not grant you the rank of master.

Obviously, the appeal of Star Wars Jedi Fallen Order is mainly in its story campaign. Which lasts around 16 to 20ish hours depending how long you solve the puzzles and navigate the map. Anyways, if you have not already spoiled the story way back in 2019. There is still fun to have its campaign. Otherwise, the slowed paced linear story progression will fee like an even bigger slog to go through. 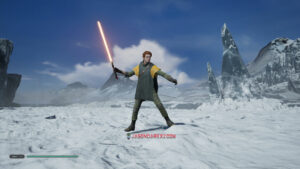 Nevertheless, the campaign has you play as Cal Kestis a fallen Jedi Padawan during the rise of the Empire between Star Wars Episode 3 and Episode 4. A realm also explored in the now Legends (non-cannon) Star Wars the Force Unleashed. While Force Unleashed story was more fast paced paired with it is chaotic gameplay. Fallen Jedi Order dials it back by 10. This is due the inclusion of puzzles and exploration at a controlled pace in which Cal must learn Force abilities in a certain order in order to progress. 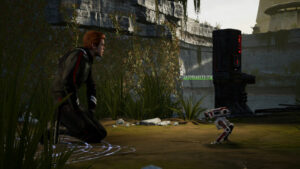 In my opinions Cal himself is a bland character, It’s the droid companion BD-1 which gives the protagonist some personality. Throughout Cals journey exploring the five available planets. Being a linear Story experience effectively renders the new game Plus mode useless. As only your cosmetic unlocks carries over into NG+. The Story progressions follows a similar pattern: Go explore an area, re-learn a force ability, solve a puzzle, the story reaches a high point. Then drops back down, rinse, repeat until you reach final location. Where the game ultimately just ends and screams sequel game, please! 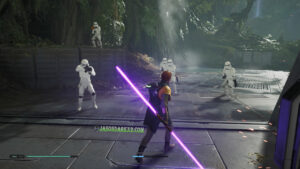 Overall, the Story aspect just feels good in my opinions. Having to be heavily tied to the Star Wars lore. Respawn, kinda drew themselves into a corner. Which is evident in the gameplay aspect. As it felt like they shy away from taking any risk making Cal a true Jedi with the choice of tapping into both the Light and Dark. Keeping at the minimum, after all Cal is just a Padawan from start to finish. Progression doesn’t overall make one feel any stronger just able to do more.
Star Wars fan looking for a Jedi Padawan experience should feel right at home.

Armed with the basic force abilities such as Push, Pull, slowed, and basic forward flip jump. On higher difficulty mastering dodge and parrying is all you’ll have to resort to. No fancy, flashy Jedi lightsaber/force combos. A combat challenge mode awaits the player long after the credit roll, if they enjoyed the combat aspect. I didn’t enjoy it, as unlocking cosmetics in this game are rather pointless. 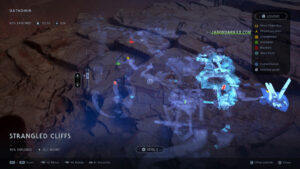 The poor navigation is my other major gripe that’s killing the replay value for me. Having to constantly pull up BD-1 Holomap to figure out where to go. Since traversal puzzles are also a thing. Having to back track was a pain in the butt. Paired with the fact you can’t fast travel back to the Mantis(ship) means you’ll waste more time finding your way back. Effectively killing any motivations to comfortably revisit planets without getting lost.

Technically speaking, since I played on Stadia the performance was on par. No major issues encountered besides the occasional random disconnection from Stadia server glitching. Although Fallen Order isn’t a high graphical demanding game. Having it on Stadia will allow you to save a bit of disk storage playing it through the Cloud, which also means you’ll need to be connected online to play a largely single player offline game.

In conclusion, if you can pick up Star Wars Jedi Fallen Order for $20 or less. It’s good for a weekend play through of its story campaign and achievement/trophy hunting. To help wash out any bad taste left by watching the sequel Star Wars trilogy. Otherwise, it's probably better to wait for a proper sequel Jedi Fallen Order game taking the game to it's full potential. Then play them in succession of each other. May the Force be with you!