Released on March 6, 2015 conveniently after the infamy 2.0 update which was March 5th, It’s been nothing but endless fun with all the spring break hype train updates and free content being pumped out by daily Overkill software. It was hard to find time to actually write a review on this weapon pack since it’s such a blast almost literally. But I can safely say that this weapon pack is a must have at its full price of $4.31USD and consider what’s currently happening in the universe of Payday 2, now is the best time to get this. 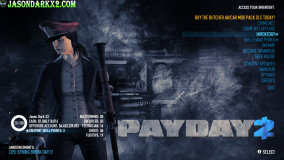 So here’s what to expect from your $5.00 with The Overkill Pack. You’ll be getting 2 weapons and 2 cosmetic contents which one is a skin and another is a mask. Let’s not forget the 10 new obtainable achievements that come with the release of every weapon pack, don’t know why they still market steam achievements as part of the DLC. It's pretty much as expected with all paid content now days. But hey anyways the number of content may seem a bit low at first glance for that $5.00. Rest assure 2 of those content makes up for that $4.31USD bucks.

Now let’s start with the primary reason why one should get the overkill pack, and that would be the RPG Rocket Launcher weapon. Taking the secondary weapon slot and packing a 10K base damage with a large blast radius taking out anything, including friendly within the radius in a single shot. The perfect choice for when playing on overkill or Deathwish for effectively clearing out those Dozers and shields in a matter of seconds.

It's no joke, with great power comes great responsibility which seriously applies to this weapon with an ammo of 4 rockets, you have to use it sparingly since the only way you can replenish it is through the use of an ammo bag, chewing up your crews ammo bag for rockets isn't ideal. So be responsible. The RPG is ideal for mastermind/enforcer or tech/enforcer builds. Seriously, why would you take an RPG with a stealth build? Sadly, with a high detection and no concealment mods, it’s hard to use with a dodge build too. Seriously better than taking a pistol to an armored transport heist.

Vulcan Mini gun
Next off, it’s the new Vulcan Mini gun weapons, let’s just say you can forget about accuracy and speed when using this. Taking the primary slot this weapon packs a 3K fire rate with a 750 magazine outputting a measly 38 point damage. Alongside a 40% movement penalty who in their right minds would use this you might ask. Most likely the guy who’s telling you get to the chopper! While spraying bullets. No doubt ably that’s what it’s good for paired with the bullet storm skill in enforcer tree you can get a stratifying 25 seconds of spraying bullets at cops while crew members move loot bags. Overall great weapon, but mods is a bit useless as it only improves recoil and movement speed. 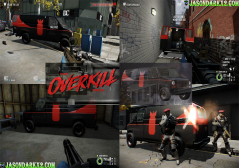 Finally the part you all been waiting for the cosmetic stuff ha-ha yeah just kidding. Starting up is the New Escape Van skin, Yeah their seriously taking us there with useless skins. The black van honestly is a nice touch as opposed to the default blue one. The red overkill decal is a love or hate matter. If they had a blue 2$ decal instead I’d be happy Heister if you get my flow. You should note if have this DLC installed it replace the default blue escape van no option to easily switch between. As for the Hat called the “General Overkill” it’s a really nice addition as we finally have a normal hat mask in the form of an M. Bison. It would have been nice if we could wear our infamous shades with it. But hey, it is what it is. 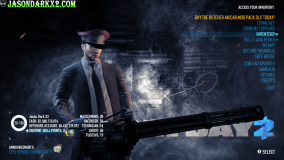 Overall finally a weapons pack that’s a bang for the buck, But isn't without its own set of flaws and downsides. I’ll only recommend it to players who like to play loud or take Plan B in Payday 2. Otherwise primarily stealth players should probably wait for a sale. Unless you like explosions and total destruction then the overkill pack is your go to weapon pack cause seriously who doesn't like blowing shit up.